I don’t think I’m alone in thinking that brunch is a fabulous thing. I could wax poetic about how anything goes, it’s a great excuse to sleep in and still enjoy breakfast foods, etc., but you already know all this. So instead, I’ll give you a recipe for a super easy brunch dish that would be perfect for New Year’s Day… or any day for that matter.

While I may be one of the few and far between not doing a wrap-up of 2012 post or a pre-2013 post, I’ll share with you a few things that in just the last few days, I’ve decided will be my “to-do’s” of the new year. They’re quite simple: run more, cook more (recipe creation, really), complain less, learn to take better pictures, and practice yoga more… all while striving to be happy and healthy. I guess you could say there’s a trend of “more” for 2013, which I’m okay with. Since 2012 was far from what I expected, I have high hopes for 2013. Of course, the aforementioned to-do’s won’t happen without action from me, so we can say that I’m planning on making 2013 the year of doing. I’m pumped.

I’ll be kicking off my year of doing with a 5k on Tuesday, aptly named the Hangover 5k. I somehow hurt my foot on Wednesday last week, ran on it anyway on Thursday, and could barely walk by Friday. So, I haven’t run since then, making my goals for this 5k to just finish without foot pain. Goofy is just under 2 weeks away, and I have to make sure I can finish those 39.3 miles! The 5k will be my first race as an Oiselle Team member, and I can’t wait to rock the racing singlet, rundelicious top, and lesley knickers! And then after the 5k, I’ll probably make this fabulous brunch dish, again.

So next time you’re looking for something brunch-y to eat, you can give this a try. It isn’t really a frittata, or a strata, or a crustless quiche. I suppose it’s more of a Sweet Potato Egg Pie… so that’s what we’ll call it. Cheers to a happy and healthy 2013! 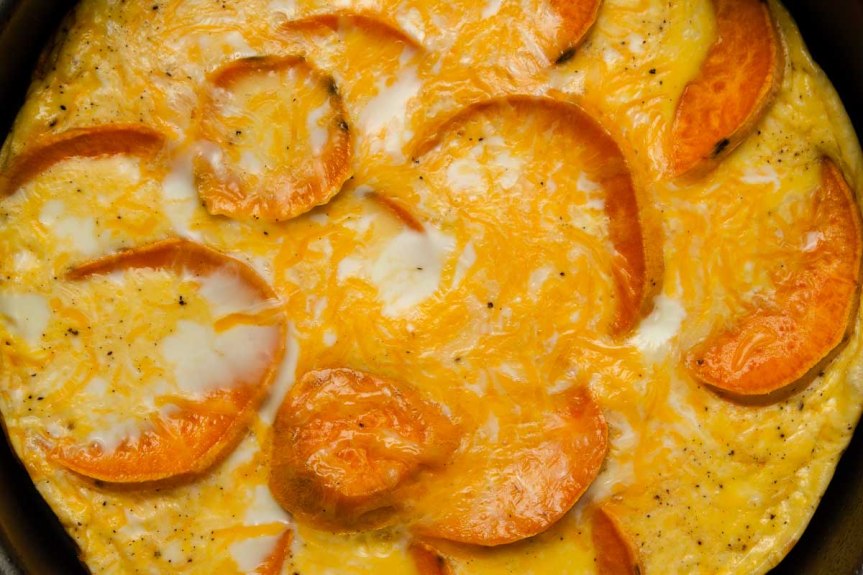 Directions:
1. Preheat the Oven to 350 degrees.
2. Coat a cake pan or pie dish (I used a cake pan) with non-stick cooking spray. Layer the sliced sweet potatoes along the bottom, covering as much of the pan/dish as you can. Bake for 15 minutes.
3. In a medium bowl, whisk the eggs and milk together until combined. Add the cheese and season with salt and pepper.
4. Once the potatoes have cooked for 15 minutes, remove from the oven. Pour the egg and cheese mixture over the potatoes, and cook for an additional 15 minutes, or until the eggs are set.

2 thoughts on “Sweet on Brunch”