You won’t usually find weekly wrap-up or list posts here, but every once in awhile I like to share what I’m in-the-moment loving; I generally love when other bloggers do them (though I don’t like “best of what I’ve written over the last month” posts) since I’m almost always introduced to something new. I’ve done a few “This Week in Yum” posts which I enjoy, but today’s is going to cross a few different subjects.

Picky Bars
First up relates to both food and running – two of my most favorite things. I already talked about my running fuel of choice, but now that I’ve had the chance to devour almost all of my first month’s supply of Picky Bars, I figured I’d throw them another shout-0ut. Seriously guys, these bars rule. And I’m not just saying that because the amazing Lauren Fleshman is now my Oiselle Teammate… I mean it! 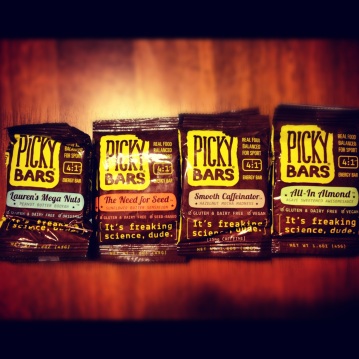 These bars have come in handy a lot over the last month – pre and post run fuel, mid-morning and afternoon snacks, and even on the slopes while snowboarding! They definitely have more substance than the little granola bars I was trying to eat as a snack (that would just leave me hungry), and I like to think they’re way better for me. Plus, who doesn’t like supporting a small business that loves sport just as much as you? I am so glad I found these bars and am able to participate in their monthly club.

Oiselle Distance Shorts
When it comes to running shorts, I’m more often unhappy with them than I am happy. Whether they’re giving me a wedgie, getting stuck in between my thighs (which I don’t think are THAT big), are too short, or just generally uncomfortable, I’m picky when it comes to running shorts… especially if I’m going to be spending a long time in them. I converted to the (longer) spandex short not too long ago and was content with them; but truth be told I longed for that “runner’s shorts” look. You know, the parachute-esq shorty short that for whatever reason, to me, makes you look like a “real” runner.

I had all but given up on the dream until I got my first pair of Distance Shorts from Oiselle. Sure I had a pair of the famed Rogas, but still wanted to give their other shorts a try. I decided to wear them for the Disney  Marathon, and was pleasantly surprised. I had zero chafing, no uncomfortable fabric bunches, and despite being soaked with sweat by the end, were really comfortable. And the bonus? They have two zippered pockets (one on the side and one in the back) in addition to your typical waistband pouch. Talk about love at first run.

Hot Chocolate Pop-Bars
These little treats came to me in my PopSugar “Must Have” box for January. At first I thought they were just pieces of chocolate on sticks (more eloquently called a lollipop), but after inspecting the packaging I realized they were meant for hot chocolate. Now don’t get me wrong, I’m all for powdered hot chocolate (hello convenience), but there was something so decadent about heating up some milk and watching good quality chocolate melt as you stir.

They have a store in the city (on the corner of Carmine St. & 6th Ave.) where they sell gelato and sorbetto bars; and you can create your own! I’ll definitely have to check them out next time I’m in the city.

Timehop App
For anyone that has social media sites (i.e. Facebook and Twitter), you need this app! The concept is really simple, and totally awesome. Each day the app looks back within each of your linked social media sites to see what (if anything) was tweeted, posted, or shared on that same date in years past. It’s really fun to see what pictures were posted of you on Facebook 6 years ago (hello college nostalgia) as well as the types of gem Tweets you shared.

It’s provided some serious laughs for me and nice little reminders almost every single day. You can even share what’s posted within the App, as well as tweet, e-mail, and Facebook it out so others can see what you were doing, too!

So that’s what I’m loving right now. How about you?
Anything you’re currently obsessing over that I should check out?
Do you have any of the things I mentioned above?

Disclaimer: In case you thought for any reason I was getting these goods for free or being compensated in any way for this post, rest assured I’m not. I am talking about these products and the companies on my own, because I think they rock!