You didn’t think I was going to give you a Chicago Marathon recap without talking about food, did you?! I wish that I had a glowing food post for you like I did last time I was in Chicago, but unfortunately this trip was more about the race than it was the food, and I didn’t get to visit everywhere I wanted. At least that just means it’s an excuse to go back!

As I mentioned in my race recap, we were up early and off to the expo on Saturday morning, so breakfast was a stop at Starbucks next to our hotel. After the expo, though, we headed to Native Foods Café for lunch, which happened to be just around the corner from our hotel. It’s actually a chain, but only has a few locations; mostly in Chicago, California, and Colorado (guess they like C states!). I had searched for vegetarian restaurants prior to the trip, and since this was around the corner and had good reviews, I knew we had to check it out. After quickly browsing the menu, Andy ordered their Portobello “Sausage” burger with a side of seasoned fries, while I opted for the Twister Wrap [salad greens, fresh avocado and cucumber salsa, creamy chipotle sauce and your choice of crispy, blackened, or grilled Native “chicken” in an organic whole wheat wrap] with a side of kale, and we split their lavender lemonade.

The food was awesome. The Native “chicken” looked, felt, and tasted like chicken (I opted for it blackened), and they didn’t skimp on the avocado which I always appreciate. And Andy, not a vegetarian (but woefully eats as one most of the time) really enjoyed his burger, too. I would have loved to try everything on their menu, but unfortunately our trip only allowed us to visit once. I would love to have a vegetarian restaurant like that around me!

After a trip to Target and relaxing our legs for a bit, we headed off to dinner at Rosebud Theater District. Our main goal for dinner on Saturday night was very simple: pasta. So, the obvious choice was to search for a nearby Italian restaurant. Despite staying in the financial district of the city, we had a lot of options that were open on Saturday night (though there were equally as many that were closed). The restaurant had the best reviews out of every walkable place I researched, so we made a reservation prior to our trip in order to secure a spot. We started off sharing a house salad and bruschetta, which was delicious. They topped their bruschetta with fresh mozzarella, which I really enjoyed. Of course I had my fair share of the table’s bread, which they served with olive oil and parmesan cheese. I’ve never thought to mix parmesan cheese into olive oil for dipping, but you better believe I’m going to do it now! By the time we were finishing up our appetizers, dinner arrived and we dug in. I ordered the penne alla vodka and while it may not have been the safest option, it was vegetarian and I had a pretty good feeling it wouldn’t upset my stomach (thankfully I was right). I would love to go back on an evening where I could enjoy some wine! 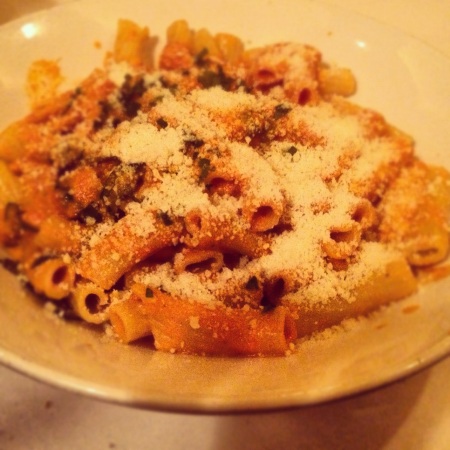 Our final meal in the city was at Giordano’s for deep dish Chicago style pizza. I know there are a lot of different restaurants that offer deep dish pizza in the city, but we actually visited this restaurant four years ago on my first trip to Chicago. As we were being walked to our seat, we both looked at each other and at the same time echoed; “seriously? This is exactly where we sat four years ago!” I mean, what are the chances of that?! Since the pizza is made to order and we were finally gaining our hunger back post-marathon, we ordered some parmesan fries to share while waiting for our pizza. We ordered our pizza with onions, peppers, and jalapenos, and it was awesome. We even made sure to get a pizza big enough to bring some back to the hotel, since we both knew our hunger would rage late into the night; and it did. I’m a New York style pizza girl all the way, but sometimes it’s nice to change it up and do what I like to call ‘knife and forking it.’

Now, I wouldn’t typically make note of airport food. I purposely didn’t mention the food we ate at Newark Airport because it was awful. I do, however, feel the need to mention the food I had at Chicago O’Hare. Since we were flying United, we were stationed in Terminal B right next to the most delicious airport food I’ve ever experienced – Rick Bayless’ Tortas Frontera. If you are even remotely into food, and more specifically Mexican and Southwestern food, then you know the name Rick Bayless. As you all know I am obsessed with both food, and more specifically, Mexican/Southwestern food. So as soon as I saw that name attached to a sign hanging next to our gate, I insisted on getting something. I double checked Yelp an FourSquare reviews, and it was no surprise to see phenomenal reviews. After quickly doing a once-over of the menu, I ordered the rosted garlic mushroom torta which had crimini, shiitake, and oyster mushrooms, chipotle garlic mojo, goat cheese, black beans, and arugula. It was heaven between two pieces of crusty bread.

Just like I can’t wait to run my next marathon, I can’t wait to head back to Chicago to enjoy the city more. Hopefully, I won’t be waiting another four years to make my return!