Getting a CSA box each week has been such a treat – we pick up on Fridays, so I always look forward to the Thursday “newsletter” with a list of the week’s fruits and vegetables, as well as recipe ideas and tips for storing everything. Once I get that e-mail, it’s all about planning the week’s meals around the fruits and veggies. Most of the time I don’t have trouble coming up with uses for everything, but once in a while I’m stumped. Included in this week’s box (among other things) were some leeks and arugula that I wasn’t quite sure what to do with.

I’ve only cooked with leeks once before (though I absolutely love them), and have only had arugula in salads, on sandwiches, and in a few pasta dishes. Originally my thoughts were to keep the two vegetables separate – I didn’t want to blow through my CSA box before we were halfway through the workweek. The more I thought about it, though, the more I realized the two would pair well together alongside eggs.

Truthfully, I’m not usually a big egg fan. Blasphemy, perhaps, but I never really enjoyed them the way that so many people do (I’m talking in the “OMG I eat eggs every single day!” kind of way). Growing up I would have hard boiled eggs, but that was typically as far as my eggventures went (see what I did there?). Omelets were manageable for me too, as long as they were stuffed with veggies and had an equal ratio of cheese to egg. Eventually in college I realized eggs and omelets were my best option for breakfast, and I learned to love them with ketchup (again, a lot of people think it’s totally gross, and I did as well way before I would willingly eat eggs). Until recently, I would typically chose something without eggs over something with eggs, but they’re growing on me. Maybe it’s because I finally know how to cook them and use them with other flavors I enjoy, or my taste buds are changing, but I’ll take it either way.

Since I’m currently on the egg train, I’m going to ride it for as long as I can. Enter the leek and arugula frittata! The frittata is one of the easiest dishes out there, and it’s so incredibly versatile I don’t know why I only recently started making them (oh, right, because I’m not a big egg fan…). You really can throw almost anything into a cast iron skillet, saute it, top it with eggs, cook it a bit, and call it a day. Seriously – I basically just wrote out the recipe. Obviously for this frittata I used leeks and arugula, but a few weeks ago I made an equally awesome Swiss chard version. And the very first frittata I made had soy chorizo and kale in it (and it was called a strata, but whatever), and I dream about it, it was that good. Basically what I’m saying is get creative with your frittata – or give mine a try! 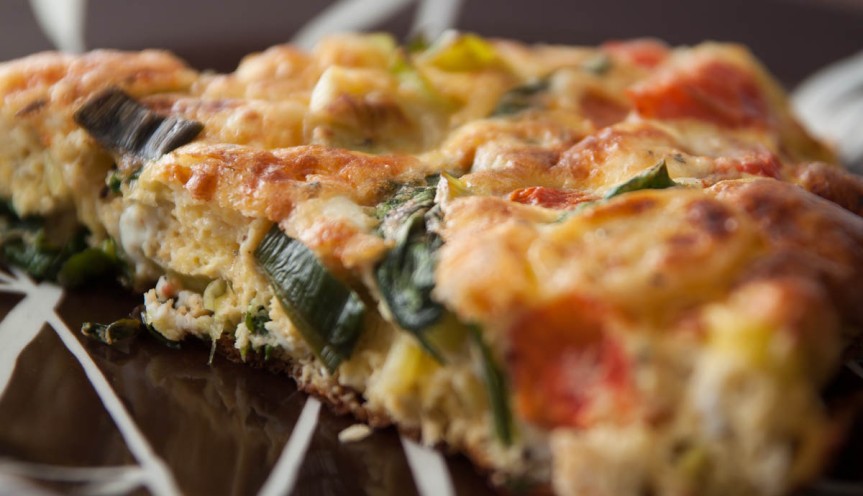 Directions:
1. In a cast iron skillet, melt butter over medium-high heat. Add leeks and sauté for 10 minutes. Season with salt and pepper.
2. Meanwhile, beat the eggs in a medium bowl and dd in the cheese. Set aside.
3. Add in the arugula and tomato, and sauté for an additional 2 minutes until the arugula is wilted.
4. Meanwhile, preheat broiler on high.
5. Pour in the egg and cheese mixture and stir to make sure everything is combined. Using a spatula, lift the eggs on the edge of the skillet, tilting the pan to allow the egg mixture to drip to the edges. Continue doing this as it cooks for 10 minutes.
6.  Take the skillet and place it in the oven with the broiler on high, and cook for 3-5 minutes, until the top is golden brown.

There are a few things that I’m a huge fan of, that if you haven’t gotten by now, I’ll spell out. One of them is Mexican food. The other is the food blog Serious Eats. Combine the two into a recipe, and you know I’m going to try it!

Last week I found a recipe for a Chilaquiles Fritatta. I’m not going to pretend like I knew what that was ahead of time. Sure, I know what a fritatta is. But what the heck are chilaquiles?! Well, it means “herbs or greens in chile broth” and basically combines left over tortillas and hot sauce/salsa. If you’re going to combine something spicy and fried, I’m sold!

The recipe itself seemed easy on the outset, but frying little tortilla strips is tedious. And apparently in my kitchen, also dangerous! While I was transferring some from the pan to my plate with a paper towel on it so some of the excess oil could drip off, I placed the plate to close to the flame, lighting it on fire. I quickly threw it in the sink and put water on it, ruining half of that batch. While I was in the process of making them, I snuck a few to sample. They would be great with ice cream. I picture them with a vanilla ice cream and some sort of apple cinnamon concoction. I’m not sure how, but I know it would work!

Aside from almost lighting myself on fire, my only other mishap was dropping an entire package of eggs. Thankfully, only four broke, and I had another package with three in them. I can’t believe the luck I had! It’s a miracle that I and my fiance got out of the kitchen alive!

At any rate, once the tortillas were done, the rest of the recipe was smooth sailing. It calls for either creme fraiche or sour cream, so I of course went with the sour cream. Whisking sour cream and eggs together makes them super creamy and fluffy. I’m not a huge egg fan, but I really enjoyed these! I also left out the scallions, as I didn’t want a huge bushel and nothing to use them with. I didn’t miss them, either. Also, it notes you need cubed queso fresco. Honestly, I had no idea what that was until I Googled it. It basically just means “fresh cheese.” I just went with some Monterey Jack.

The recipe also says it only needs to bake for 10-15 minutes. It took mine more like 25 minutes to ensure the eggs weren’t runny. I didn’t mind, but I think my fiance was starting to gnaw on his own limbs (and he wasn’t even infected with the zombie virus).

This would be great for breakfast, lunch, or dinner. But I suppose that’s only if you’re one of those people that can eat “breakfast” at any time. I used to not be able to mix my meals, but breakfast is slowly making it’s way to later points of my day. Lunch has always been interchangeable for me, but dinner stays comfortably at 4pm or later (and that’s pushing it).

I really can’t recommend this recipe enough. It’s spicy (but you can add/remove spice as you need based on your salsa choice), it has fried goodness, and it’s got some serious Mexican flair! So next time you want to have a little siesta, treat your taste buds to something equally deserving!

Directions:
1. Preheat the oven to 350˚F. Fill a cast-iron or other ovenproof skillet with a 1/4-inch of canola oil, and warm over medium-high heat.
2. Add tortilla strips to pan, and fry until golden, about 1 minute on each side. Drain on paper towels.
3. In a large bowl, toss fried tortilla strips with salsa or hot sauce until well combined. Remove all but 1 tablespoon of remaining oil in the pan, and discard.
4. In a small bowl, whisk the eggs, crème fraîche, salt and pepper with fork until just combined.
5. Pour egg mixture into the skillet, add chiles, 1 tablespoon of cilantro and half of the scallions. Let excess sauce drip off tortilla strips, and add to egg mixture.
6. Evenly distribute cheese on top of the frittata. Bake in oven until completely set, approximately 10 to 15 minutes.
7. Finish by garnishing with remaining cilantro and scallions, as well as extra hot sauce. Serve hot or at room temperature.